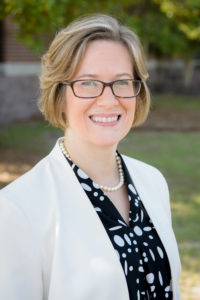 Elizabeth Summerell has been in league for three years. Elizabeth’s mother was born and raised in Savannah and both her mother and aunt were active in the Junior League of Savannah before they moved away. Elizabeth’s parents moved back to Savannah in 2014 after being away from more than 30 years and she followed them in the Fall of 2015 after living most of her life in the Virginia suburbs of Washington D.C. Elizabeth joined the junior league as a way to get involved in her community and as way to make friends in her new home.

In her first two active years as part of the Junior League, Elizabeth served on the cookbooks committee, with the second year as Cookbook Chair-Elect. Elizabeth passed on serving as the Cookbook Chair for the 2019-2020 league year to accept the newly created Director of Finance position.

Elizabeth has been a certified public accountant for over 11 years and her clients since joining a Savannah accounting firm include several large and small not-for-profit entities in the greater Savannah area.  Besides being involved with the League, Elizabeth also serves on the Board of the Flannery O’Connor Childhood Home Foundation and is the treasurer of her church’s annual holiday bazaar.  For fun, Elizabeth enjoys playing in an adult kickball league, hanging out with her dog, Kayce, or playing trivia at one of the local bars with fellow league members.