1920s
Two circles of The King’s Daughters, The Margaret Bottome Circle and The Elizabeth Butler Circle combined volunteer forces to become the Junior Service League. On January 7th, 1926, this organization was accepted as a part of the Association of Junior Leagues of America, and thus the Junior League of Savannah began.

Early years in the League saw community volunteer activities covering a wide variety of efforts with many organizations.

The League’s first fundraiser was the Junior League edition of the Savannah Morning News. Members also raised money by holding tea parties, balls, a horse show and a golf tournament. The League held its first Follies a theatrical revue, in 1934.

1940s
The League had the opportunity to rise to the challenge of a nation in war, and the League members worked on many different local projects. Projects included USO Traveler’s Aid, Civil Air Patrol, Civilian Defense and Child Placement services. Volunteers served in at area hospitals, the Telfair Art Gallery and the Red Cross Blood Bank. The first Thrift Sale was held in 1942. It raised a net profit of $1,610.

1950s
The attention of the League turned to focusing on cultural and human welfare concerns. Work was done at with the Children’s Services and the Foster Home Program, Savannah Area Better Recreational Enterprise, The Historic Savannah Foundation, along with many other programs. During this time the first League Headquarters was founded at the Owens-Thomas House. Between two Follies and two Thrift Sales a total of $87,430 was raised to fund community projects.

1960s
The League continued to be active in the area. Community projects included with with the Youth Museum, Savannah Speech and Hearing Center, the Board of Education and other local groups. Historic Savannah was published and dedicated to the Junior League of Savannah. The Thrift Sale and Follies continued as major fundraising events to support the extensive community projects.

1970s
The League continued its commitment to the community by increasing its community funding  and was able to support additional local community organizations. Some new organizations included Georgia Public Radio, Savannah Science Museum, Drug Educational Program, Child Advocacy among many others. Savannah Style was developed during 1979. The Junior League of Savannah moved their Headquarters to the Scarbrough House. The Follies and The Thrift Sale continued to gain popularity and fundraising increased.

1980s
The League collaborated on projects with a number of organizations. These organizations ranged from Savannah Area Family Emergency Shelter to Mothers Against Drunk Driving, Salvation Army, Girl Scouting In the Inner City, Kids Who Care Scholarship and many others. A new League Headquarters was established at the Girl Scout Carriage House. The Thrift Sale and Follies continued to be the popular fundraisers.

1990s
The League continued the tradition of community support and service. The first Community Focus area was parenting, “Parenting Power.” Major projects included Done In a Day Children’s Literary Festival, the Fast Friends Project, the Hands on Project and others. The League was able to focus on a second Community Focus area by supporting  the elderly, in “Juniors to Seniors. ”Projects in this focus area included Meals on Wheels, Seniors in Force, and Hands on Homes. In 1995, the League was relocated to the Village Square on Victory Drive. Downtown Savannah Style was introduced as the new cookbook.

2000s
In 2002 education became the Community Focus area. Community partners included: Coastal Children’s Advocacy Center, Habitat for Humanity, Massie Heritage Center, Frank Callen Boys and Girls Club and various other community organizations. In 2008 we introduced the use of social media platforms to communicate with our members. Cookbook sales continued, and netted a profit of $15,000 for the League. In 2005, the Association of Junior Leagues International introduces “Kids in the Kitchen” and the Junior League of Savannah adopted the healthy kid initiative as a project area.

2010s
The League continued to partner with local community groups including West Broad YMCA, Rape Crisis Center of the Coastal Empire, Ronald McDonald House, and Urban Hope, among other groups. The Thrift Sale continues to serve as our largest fundraiser. FitKidsFest, a healthy lifestyle fair, began in 2013. The Junior League of Savannah Masquerade Live and Silent Auction became a distinct event in 2015.  On The Squares – Savannah Style was produced in 2015.

Present
The Junior League of Savannah’s current Community Focus area is Kindergarten to 12th Grade Education Performance, with a special focus on improving the lives of women and children. The League’s region includes the South Carolina Lowcountry. Some of our latest community partners include America’s Second Harvest, Frank Callen Boys and Girls Club and Loop It Up Savannah. 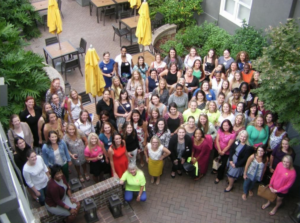